skip to main | skip to sidebar

Crooked Creek Baptist Church And Grace Tabernacle Ministries Annual Picnic & Celebration Sunday, October 7, 2018 5540 N. Michigan Road Indianapolis, IN 46228 “Fellowship Hall” Invite a Friend…Bring the Family… 9:30 a.m. – 12:00 Noon Casual Sunday School and Worship (WEAR YOUR PICNIC CLOTHES) 12:00 p.m. Lunch, Fellowship and Fun MENU Grilled Brats Hot Dogs Hamburgers Members: We Need You To Please Bring: • DESSERT (Last names beginning with A-G please bring one dessert per family – generous serving) • VEGETABLE (Last names beginning with H-P please bring one vegetable per family – generous serving) • SALAD (Last names beginning with Q-Z please bring one salad per family- generous serving) • Drinks and Table Service provided • PLEASE NOTE THE CHANGE IN WHAT YOU ARE TO BRING FOLLOWING LUNCH, 1:00 p.m., THERE WILL BE GAMES, SURPRISES AND FUN FOR EVERYONE! For the younger kids, a table will be set up with coloring books & crayons AND each child can each take their coloring book & crayons home!
No comments:

Our next church picnic will be held on October 7th immediately following our regular 10:45 am worship service. Hope you can join us! https://crooked-creek-baptist-church.business.site/?m=true
No comments: 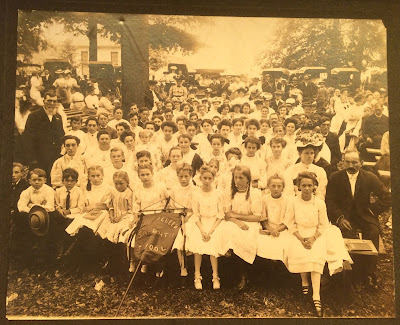 Crooked Creek Baptist Church has been doing picnics well for more than a century, and so it is no wonder that our picnics continue to be so popular with present members, former members, invited guests, and anyone else who joins us. Based on the clothing worn, the photo above was probably taken sometime between 1890-1910. We've been here for a long time, and we've constantly reinvented ourselves. But from what we can figure out from really old written and even photographic accounts, we've always been welcoming, and we've always done food well. We're open to change in lots of areas, but we also preserve our traditions when they've stood the test of time.

We hope you'll join us at our next such event. We have a community cookout planned for February 28th, 2018, starting at 11:30am. It won't look anything like the photo above...but you should definitely click it and take a closer look!

Please join us next Sunday, June 11th, as we celebrate the 180th anniversary of Crooked Creek Baptist Church. We are older than Butler University, and as you can read in a brief history of our church available online, we are the third oldest congregation in Marion County!

Hope you can join us to commemorate this special occasion with us! 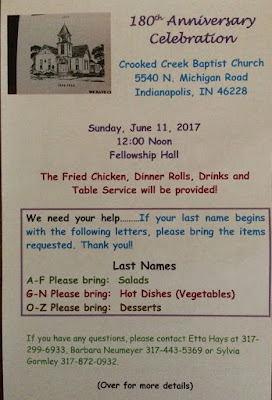 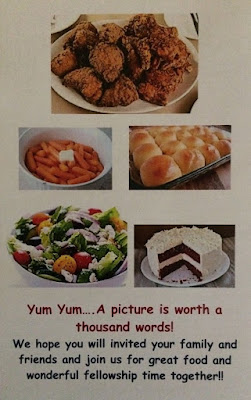 Pastor Mark is a native of Ohio, who first came to Indiana in 1985. He traces his personal commitment to following Jesus back to his parents’ example and upbringing, and his decision at age 5 to ask Jesus to be “King of my heart.” At age 17, he began to sense a call to ministry, and after studies at Bethel University (BA in Biblical Studies) and Bethel Theological Seminary (MDiv in Old Testament/ Pastoral Leadership), in December of 1985 he was ordained as an American Baptist minister.

He previously served in a bivocational ministry pastoring the Arlington Heights Baptist Church, and serving as chaplain at the Community Rehabilitation Hospital and other hospitals in the Community Healthcare Network.

He and his wife Rita consider themselves a team. They have four adult children and nine grandchildren, all of whom live in the Indianapolis area. It was family connections that led them back to Indiana after several years during which Pastor Mark served as the Pastor of the Open Door Baptist Church in Tomah, Wisconsin. Before that, he was involved in pastoral ministry in churches in Mitchell, Monticello, Mooresville, and Indianapolis, all in Indiana.

Pastor Mark’s ministry focuses on developing disciples. As he puts it, being a disciple means “KNOWING Jesus, GROWING in Jesus, CARING like Jesus, and SHARING Jesus with others.”

Moving Forward By Looking Back

Did you know that an article was written, and appeared in the periodical Congregations in 2003, about Crooked Creek Baptist Church in Indianapolis? Much of the content of that article can be found on the blog of the Alban Institute. Among the things that are mentioned are five themes that the church discerned as constants in the congregation over the years:

1. Family-focused with a tradition of generations of worshipers.2. Loving, caring community of believers who convey a cordial welcome to all.3. Committed pioneers, drawn together far and wide as one family of God.4. A cultural kaleidoscope of believers.5. Strong and steady pastoral leadership.

Visit the Alban Institute blog to read the rest. This heritage continues to characterize the church in the present day.
No comments: 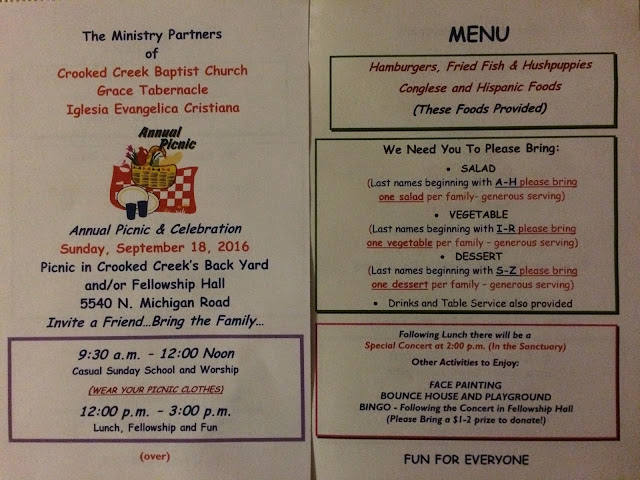 You are invited to join us for our annual picnic after the service this coming Sunday, September 18th.
No comments: